Anyone who has done code development in a team will be familiar with the idea of branching and merging. It’s a way to allow programmers to collaborate on a complicated set of code, without falling-over each other. Someone takes a copy (“branch”) of some code, modifies it, and merges it with the original copy when they are finished. Good code management systems help to see where their changes and those of others – who may have changed the same code - have caused problems, which is why branch/merge is how almost all coding teams work.

This is only important to EA modellers because it’s one of the most common requests we see from new EA users: – why can’t I do branch/merge with EA?

Up to now, the answer has been ‘because it’s hard’, and indeed a full branch/merge solution for EA would be way, WAY more complicated than one just for code, and therefore probably un-usable.

But can we get most of the benefits of a code-style branch/merge with EA, without a 100% fool-proof solution?

In a recent client engagement (details changed to protect the innocent) we had a small team of modellers (30+) working on a large but quite simply-structured model.

Let’s say they were writing Use Cases. What could be simpler?

For readers who don’t write use cases, replace ‘use case’ with your favourite EA element type (Requirement, Business Process, SysML Block – they all have the same issue).

Team #2 then produced this:

Now my client spotted this one a mile away. Carrying on like this is going to cause huge problems down the road. They were predicting 80+ actors (real-life, individual roles) and if every team created their own duplicate with the same name, this would rapidly become chaos. They would lose the ability to say ‘what Use Cases does Actor1 get involved with?’ But which ‘Actor1’ are they talking about?

So they did the smart thing, and created a master set of Actors, in a locked part of the model. And told teams to re-use those actors.

And replace any of their own duplicate versions of those actors with the master ones: 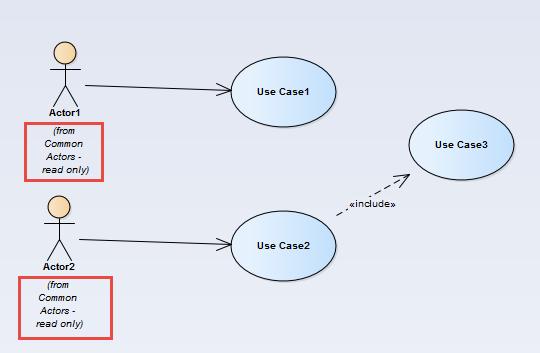 That means when we ask which Use Cases Actor1 is involved with (by the EA function ‘insert related elements'), EA tells us: 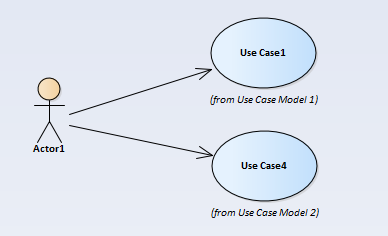 …which is the combination of team#1 and #2s models, as they are both using the same Actor instances from the common set.

Much more useful – and the best argument for ‘why EA is 1000% better than Visio’.

So, problem solved? Well not quite.

These diagrams and documents which show ‘related elements’ are useful for understanding what happening in a project, so they started creating more of them, but started to get things like this: 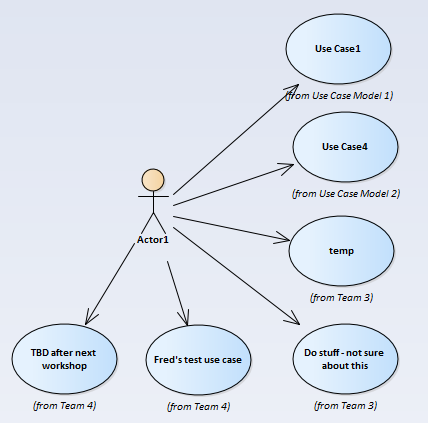 Now we can say this isn’t great use case practice, but it’s what happened when they enforced the ‘use the common actors’ rule. The master actors get connected to everything –

If I want to find out the use cases which really use Actor1, which have a status which means they are suitable for me to think about, then we need something in between the chaos of ‘invent your own’ and ‘always re-use’.

We need an intermediate state of ‘using Actor1’: something like – ‘I’m intending to use Actor1, but I’m not ready to tell the world what I’m doing’.

In the case of this customer – using EA12 – they had to create duplicate Actors with the same name, then, once they were happy, manually merge their ‘temporary’ and ‘reusable’ Actor1s. An alternative would be to give each Use Case a status, but this means we can’t use ‘insert related elements’ quite as simply.

So not a great solution.

Then along came v13

EA V13 has introduced the idea of ‘time-aware EA’. Looking past the rather grand title, it does provide a small amount of function which should make this problem a lot simpler.
So now, here is the same story, using EA V13. 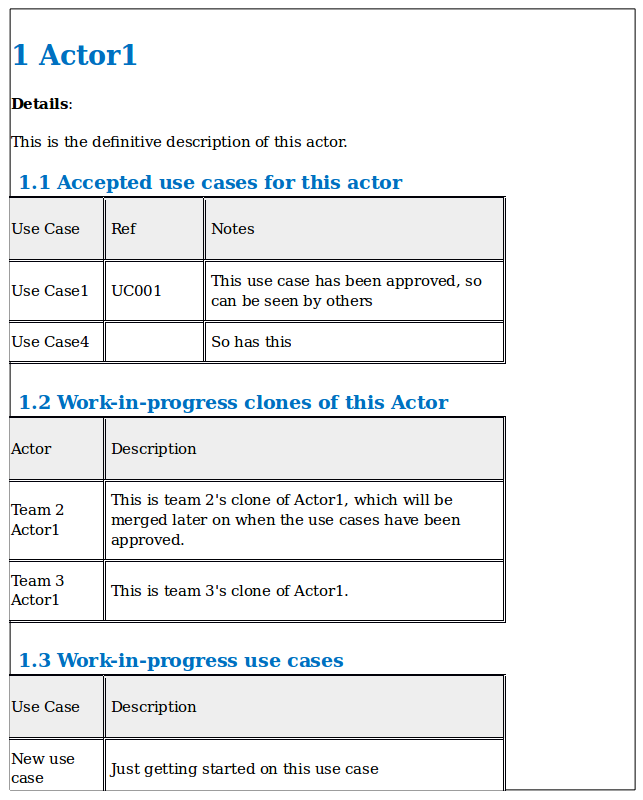 Note to Sparx Systems: Next Steps?

Now that we have this starting point, I’d like to suggest that we need some improvements to the EA UI which will allow us to go further:

The V13 ‘time aware’ function is limited, but it is a start, and it does show the way to achieving what EA users have wanted for a long time – the ability to have multiple ‘versions’ of the same thing in a model at the same time.

This has many more implications for EA users, as it opens-up new ways of using EA. We can now allow teams to explore new ideas without messing-up the model for other uses, and keep track of those explorations using standard EA techniques.

Ian Mitchell is a Business Analyst by trade, and designer of the eaDocX and Model Expert Extensions for Enterprise Architect. He’s been an EA user since v3.5, and in the IT industry in all kinds of roles for 30+ years. He also writes the Artful Modeller blog.