The simulation of cyber-physical systems plays an increasingly important role in the development process of such systems. It enables the engineers to get a better understanding of the system in the early phases of the development. These complex systems are composed of different subsystems, each subsystem model is designed with its own specialized tool sets. Because of this heterogeneity the coordination and integration of these subsystem models becomes a challenge.

The Functional Mockup Interface (FMI) specification was developed by an industry consortium as a tool independent interface standard for integration and simulation of dynamic systems models. The models that conform to this standard are called Functional Mockup Units (FMU).

In this work we provide a method for automated FMU generation from UML models, making it possible to use model driven engineering techniques in the design and simulation of complex cyber-physical systems.

The Functional Mockup Interface (FMI) specification is a standardized interface to be used in computer simulations for the creation of complex cyber-physical systems. The idea behind it being that if a real product is composed of many interconnected parts, it should be possible to create a virtual product which is itself assembled by combining a set of models. For example a car can be seen as a combination of many different subsystems, like engine, gearbox or thermal system. These subsystems can be modeled as Functional Mockup Units (FMU) which conform to the FMI standard.

The Functional Mockup Unit (FMU) represents a (runnable) model of a (sub)system and can be seen as the implementation of an Functional Mockup Interface (FMI). It is distributed as one ZIP file archive, with a ".fmu" file extension, containing:

The inclusion of the FMI model description file and the FMI API is mandatory according to the FMI standard.

Enterprise Architect is a visual modeling and design tool supporting various industry standards including UML. It is extensible via plugins written in C# or Visual Basic. The UML models from which we generate our FMU are defined with Enterprise Architect.

We further used the FMU SDK from QTronic for creating the FMI API. It also comes with a simple solver which we used to test our solution.

Our basic example to test our solution is called Inc. It is a simple FMU with an internal counter which is initialized at the beginning and it increments this counter by a specified step value, each time it gets triggered, until a final to value is reached or exceeded.

The state machine contains just an initial pseudo state which initializes the state machine and a state called Step. The Step state has two transitions, one transition to itself, in case the counter is still lower then the to value, if this is the case, the inc() operation will be called and we are again in the Step state. If the value is equal or greater to the to value, it reaches the final state and no further process will be done. 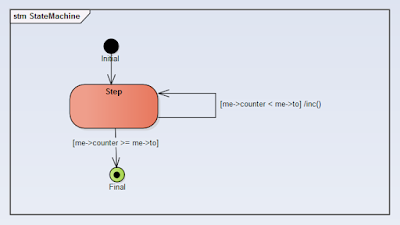 The class diagram consists of two parts. The left part with the Inc class is project specific. It holds three attributes: counter, step and to. All attributes are of type int. The initial value for the counter is 0, for the step it's 5 and for the to value it's 50. The FSM classes on the right are the mandatory classes for the Embedded Engineer to be able to generate the state machine code.
Some specific implementation code also exists in various places. In the state machine you can see, that we have some guards on the transitions. These guards are actually code that will be used to generate the code for the state machine:

The property me represents a pointer to an instance of the Inc class.

And finally the implementation of the inc() operation is also provided:

First we manually created our reference Inc FMU, the following steps where taken: 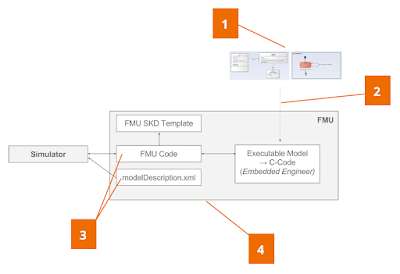 Now we want to automate the creation of the FMI model description file and the FMI API. For this purpose we wrote our own Enterprise Architect plugin. To be able to generate semantically correct FMI model description and FMI API artifacts, we attached additional information to the UML models. This was achived through the definition of various UML stereotypes for UML class attributes and methods. Since the FMI defines its own data types we also had to map the data types used in the UML models to the corresponding FMI data types. With these challenges addressed we were able to implement our FMU generation plugin. 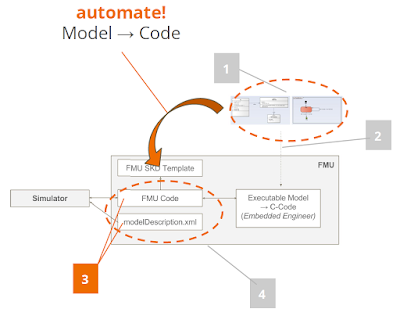 Our work comprises a fundamental prototype that is only a start and could be improved in various ways. The following list describes some issues that could be tackled.

This work has been supported by LieberLieber in the context of the CDL-Flex project: http://www.sysml4industry.org/.

I am an extrovert promoter and results-oriented controller and director. It like creating new partnerships and relations. I like people that are talking with me and it is important for me to help and motivate others. I'm very self-motivated and I prefer doing thinks I really like. I need a lot of creative and open space. But I also need people doing the administrative tasks and people realizing the ideas.

My highest motivation is doing creative work with and around Enterprise Architect. (www.sparxsystems.de)